I received an email from Geoffrey Harding, who was interested in
the spring at Cold Springs Cemetery. He is researching a tale of
the transportation of prisoners to Fort Niagara by Native Americans. I passed onto him what I knew.

Hartland town historian Norm Lajoie also asked about the spring at
the corner of Cold Springs and Chestnut Ridge Roads. This area is the
center of much early local history and many speculative tales; it does
need more investigation. Ann Marie Linnabery wrote an excellent
overview of the Cold Springs area for “Niagara Discoveries” in the
November 15, 2014, edition of the Lockport Union-Sun & Journal,
which can be accessed at www.lockportjournal.com.

One thing to be noted is that both roads, which were once early
paths, have been rerouted, and deep depressions have been filled in
so the locations may not be the same as in earlier times.
In my search for the spring, I saw water running out of the south
bank of the cemetery on the southeast corner behind the remains of
the DeSales school buildings that were razed in 1965.

In 2012, Craig
Kerrison, the Cold Springs Cemetery supervisor, said, “When the
cemetery was expanded to the east, the stream was diverted into an
underground pipe, the remnants of which can be seen in a couple of
places.” Kerrison indicated that the spring and its stream at one time
ran through the cemetery, and because of flooding problems it was
piped underground. It now runs under the length of the cemetery
and exits near the railroad tracks to the north. As the cemetery
employees go about their work, they sometimes run into it.
Kerrison also pointed out the close springs in the golf course, and
it has been mentioned that in earlier times they may have also been
part of the story. In a recent discussion with Linda Lee, a trustee of
the cemetery board who is very knowledgeable about its history, it
became clear that there could have been several springs along this
early pathway.
Recently, working with Clifford Starke from the nearby Lockport
Country Club, we discovered many springs throughout the
country club golf course.. Starke is very knowledgeable about the property; he

wrote an excellent history for a club publication. An early postcard
of the club shows a spring house near the road (Route 31) with a
stream running down the hill, and a pump house basin that was
reportedly used by travelers on Route 31.

In the brush and trees of Somerset, New York, is an old salt spring believed to have been used by local Native Americans.
Sitting quietly beside Fish Creek, the area is marked with the tracks of animals who have traveled there for the salt.

As the local history is told, this story dates back centuries to when a large, hollow Buttonwood tree was sunk eight feet into a salt seep, forming a well.

INDIAN SALT SPRING
When the white settlers first came to the Town of Somerset they found an
Indian camping ground on the small stream now called Fish Creek, about three
miles up from the mouth where it empties into Lake Ontario. The Indians camped
there at all times during the year, but especially in the spring when the
fish came up the creek to spawn. The Indians had chosen the camping ground
because of a salt water spring which, in some seasons of the year, flowed out
of the creek bed. In order to be sure of a plentiful supply of salt water the
Indians dug down to the bed rock about 8 feet below the ground, and set a
hollow buttonwood log down into the hole to create a shallow well. The log was
hollowed out by burning the interior. The salt has preserved the wood so well
that it is still in good condition all the way to the bottom.
Both Indians and whites continued to use the salt from the salt spring
up until after the Civil War. Sometime before 1900 a small dam was put in the
creek just below the spring and water backed up, covering all but the top of
the well. People still living in Somerset can remember skating on the ice pond
and circling the top of the salt well on their skates.
In 1967 a college class from Buffalo (Anthropology) camped at the site and
dug trenches in the search for Indian relics. Many broken pieces of pottery
were found and one French army uniform button. This led to speculation that
either the French had camped there with Indians at some time prior to the
American Revolution, or perhaps an Indian had purchased or stolen a French
uniform from which the button was lost. Over the years many arrowheads and
other Indian relics have been picked up in the fields adjacent to the salt
spring.
A few years ago heavy spring storms caused a flood which tilted the
buttonwood tree, and a group of Somerset citizens dug out around it and
straightened it back up.
On July 4th, 1969, another group of townspeople gathered at the salt
spring, rigged up a tripod, and set up a bucket brigade to empty and clean out
the well. Several hundred pounds of mud, stones, sticks, etc. that people had
thrown into the well for the past hundred years were shoveled up, hoisted
out and dumped on the bank near the well. When emptied, the well filled up
again at the rate of one gallon every five minutes. A gallon of the water was
evaporated and yielded about a half-pound of salt, which indicates that the
water is slightly less salty than sea water. When dry, the salt is colored a
slightly brownish yellow.
Please do not throw anything into the well and help to keep it clean for
other people who wish to see this old landmark.
SRM: Ims
cc: Dr. Richard Brown, Dr. Eric Bfrunger
Historical narrative found at Somerset Historian’s Office

The local history, which has been passed on by the early settlers,
who arrived about 1810, connects the Salt Log Well to the Native
Americans who lived in the region. The story is that the first
European settlers found the hollow log when they arrived. Although
Native American artifacts have been dug at the site, it is also on a
level bank of Fish Creek that may have been used for camping and
fishing. The log has never been dated. 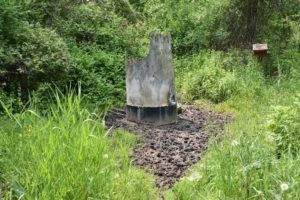 A check with Professor Doug Perrelli, director of the Archaeological
Survey at the University of Buffalo, Buffalo New York, Dept. of
Anthropology, uncovered an Archaeological Site File Checklist
number 3553, which is an Archaeological Survey completed by the
university. There was an identification of 1976, Clune & Johnson.
The site was labeled as a Historic Euro-American (1810) salt well.
The University of Buffalo Report 3553 does not support the use
of the salt by Native Americans. The report states “The residents
of the Town of Somerset believe that the well was established by
Indians. This seems unlikely. The early Iroquois, who controlled this
area in early historic times and who had close cultural affinities to
the previous inhabitants, did not use salt and avoided the best salt
spring in the area, at Syracuse, because they felt that it was inhabited
by unfriendly spirits (Jesuit Relations 41: 123–125, 16 Aug 1654).”

The report continues:
“The salt well is located on the south bank of Fish Creek,
approximately 1200 feet WSW of the SW corner of the sewage
treatment plant site. This well consists of a large hollow log
resting vertically in a pool of salty water at the south edge of
the creek. The log projects approximately 5 feet above the
water and is approximately 4 feet in diameter. Previously a
hand painted metal sign was attached to the log just above the
water line. The sign said, ‘Log placed here by Red men, oldest
known well casing 1800-1962.’ This sign is now obliterated.
Hollow Log Salt Spring 27.
The information is confusing. The account from the History of
Niagara County, New York, 1878, Stanford and Co., states that the
log was found by early settlers, circa 1810.
“About half a mile West or upstream from where Fish Creek
crosses the road that runs from Somerset village to the Lake
is a salt spring or well. There is or was a few years ago an old
hollow button wood log sunk in the middle of the creek with
one end just above the surface. This salt spring must have been
operated by someone before the white settlers occupied the
country as it has not been operated since 1810”.
There are also reports that the salt well was not used from 1810 on,
and another account that it was used by both Native Americans and
settlers until about 1900, when a mill dam was built near Quaker
Road flooding the spring area.

There was a time when there was little salt available in this region,
and it is likely that the salt would have been valuable to both Native
Americans and early settlers until 1825 when the canal boats brought
salt from the Syracuse, New York, area. Salt wells would still be in
use after 1825, because the salt was local and low or no cost.
There is an account of Native Americans catching fish in the streams,
such as Fish Creek, that flow into Lake Ontario and bringing the fish
back to Royalton, New York.
“One of the earliest settlers near Gasport was Jason Sawyer,
who came from Vermont in 1816; his father came a short time
later. Paul Sawyer built a cooper shop on the north bank of the
gulf across the present water tower.
There was a large fireplace in the shop, and each year this
attracted Indians from the reservation on their way to fish on
Lake Ontario. They would stay the night in the shop, each one
sleeping with his feet toward the fire; a day or two later, the
squaws followed. On the return, the squaws laden with the
fish that had been caught and dried, the braves followed a few
days later “.
Note that this story mentions that the fish were dried for preservation, not preserved with salt.
This account is from the “Oral Histories of the Town of Royalton”
and was forwarded to me by Jesse Bieber, the town historian.
The history records European explorers in the Niagara region as early
as the 1600s and the first settlers in the Somerset area in 1810. The
many uses of salt would be common knowledge, and information
about it would have been exchanged.

Consultation with experts and further research indicates
that Native Americans in upstate New York have left no
historical record of the use of salt for preservation prior
to 1810; however, there were references for its use for
trading. So, it is likely that the Somerset Salt Well was
created for extraction of salt for trading long before the
European settlers arrived in the Somerset, New York, area
circa 1810. The oral history from Somerset’s first settlers is
correct, and trading is the reason the salt well would have
been in use before the settlers arrived.

Note on Visiting the Springs

Many of the springs described in this blog are on private property,
and you may need permission; often there will be posted signs.

I have tried to indicate if the springs can be visited, but access often
changes. The water quality varies and can change quickly. The water
needs to be tested before use. I have tested most of the springs
with a well test kit; the water quality is good in some, and a few are
contaminated.